This is a local operation run by a group of American scammers that call you up and claim to be from the sheriff’s office of a county that doesn’t actually exist, Thompson County, Georgia. In their automated message, they give you an eight-digit alphanumeric “case I.D.,” which I’d assume you give to the person on the other end when you call back to verify that they actually called you (you could probably just make something up; their scam’s the same for everybody, I’d assume). That being said, I’m not exactly sure what they’re after, but it probably has something to do with convincing you that you were involved in a crime (with it being the “sheriff’s office,” in all) and need to give sensitive information or money to clear your name.

When I called, I had a hard time getting through, but after several tries, some man with a thick county accent picked up and asked me what I needed. Before I could say anything, the guy on the other end asked if he could call me back then abruptly hung up. He called back later from (912) 510-5100, leaving a voicemail asking for a “case I.D.” He also told me to call him back on the original number, which was (912) 574-3444 (the number that called me the first time).

I don’t know their calling area, but you may get the best results calling them from a number with a 9-1-2 area code.

This was the text I got when I called and they didn’t answer. The text came in the moment I disconnected the call.

That’s what I’ve been getting lately; I think it’s automated. I’ve tried calling from several different numbers and the same thing happens on all of them.

I’m just gonna wait and see what happens; hopefully someone texts back.

We’re probably gonna need that 8 digit case ID in order to bait them.
BTW, the (912) 510-5100 number sounds like a real Sheriff’s Office but not the county he’s claiming, so he’s spoofing their number.

It appears as if these guys have reactivated under a new phone number and are sending out automated messages to people they weren’t able to steal money from to try and lure them back in. 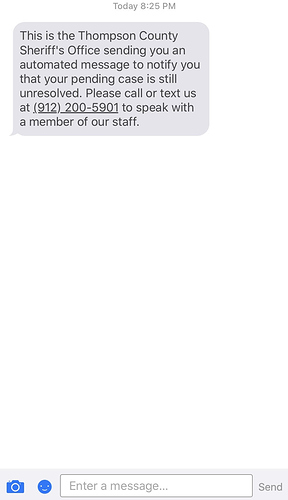 Got a case number for you guys. It’s CD581619. Hopefully it’ll help everyone get further in the scam

I went off on this guy in Hindi, now he’s texting me asking if I have a call center and if I’m hiring. Lol. Gonna see how long I can waste this guys time

That’s interesting. I thought these guys were American. When I called them a couple days ago, I got transferred to someone who sounded really country over the phone.

Ask for CV, photo, and ask him about his responsibilities at his current employer. Ask him to walk you through a typical workday of his, and other typical job interview questions. You probably won’t learn anything new about call center internal operations, but you never know until you try.

Do entry-level positions at these scam centers pay more than legitimate call centers? I guess they would pay under market rate to people who are having a tough time finding jobs elsewhere.

I hope we’d try pointing him to a legitimate call center. One more former scammer legitimately employed is one more scammer utterly destroyed.