So this is part 2 to my series where I explain Steam scams. I will try and cover as much as possible in future posts but this one is going to be on Steam admin/Moderator impersonator scam.

Steam is a massive platform for PC gaming. On Steam, you can customize your profile, make friends, play games, trade/buy/sell items, and so much more.

Alright now that I gave you a brief summery of what Steam is, now its time to explain the scam. If you already have Steam or know what steam is, great! maybe this can help.

Well its a common type of scam that has a few variations. Typically people with higher level accounts and public profiles will see this scam more often. But here’s the basic idea.

Another variation is someone randomly adds you and they say they “accidentally reported your account” and you need to talk to a community admin to get it removed.

Tldr some scammer just wants to get access to your Steam account. But there is more to that. Some scammers can be a bit more cleaver and not just straight up ask for access to your Steam account. Some scammers will sometimes ask for your steam purchase history or send you to a phishing page. You should NEVER send your Steam purchase history to anyone and heres why. In order to recover a lost or stolen account, sometimes steam support (The real ones) will ask you to provide proof of ownership of the account you are trying to recover, this can be the original email used on the account, a Steam key that has been redeemed on the account, or purchase history. Now if you give them the purchase history, usually the account login name is included so now they know exactly what account you’re on and they can go to Steam support and claim that they are locked out of their account. Even having mobile auth wont help because Steam support can disable that too.

Report them. Steam doesnt take to kindly to people impersonating their employees so their accounts can get banned pretty fast. You can also report them on Steam Rep. Which every single Steam admin impersonator I’ve reported on there, had their accounts community banned with in a matter of minutes.
Steam Rep: https://steamrep.com/
How to report someone on steam: Steam Support :: Reporting content within the Steam Community
If they get community banned, basically interaction with the Steam community is restricted and they cant add friends, comment, trade, ect. In some cases, Steam support will actually lock their account entirely and prevent them from signing into that account.

Some scammers will use older accounts like 15 year old or 7 year old. It doesn’t matter what year their Steam account was made in, if they are commenting on your page or randomly adding you pretending to be a Steam admin, they are a scammer. Steam support will NEVER contact you through a friend request or a comment on your Steam page.

A quick tldr, a scammer is pretending to be a steam admin and wants you to remove a supposed ban from your account by giving them access to your account. Thats pretty much it, I didnt cover every scenario but I covered the most common. So guys in short, stay safe.
~Snipez

An example of one of these scammers 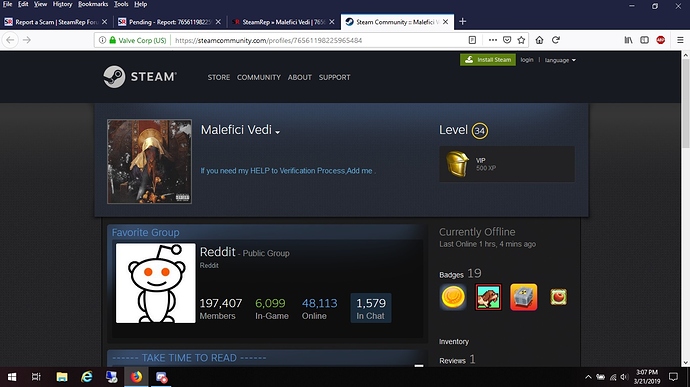 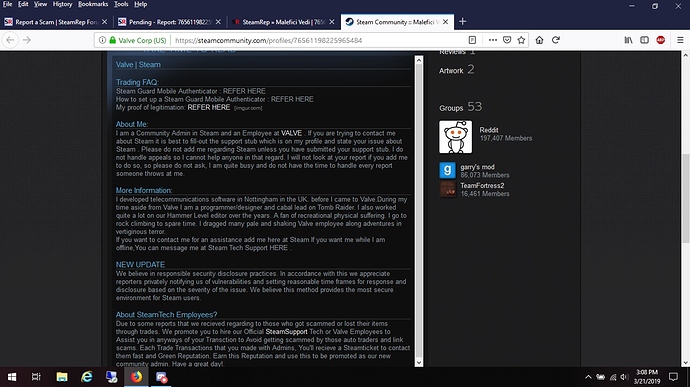 mal11366×768 271 KB
Credits go to Horse from Steam rep for the screenshots.
He got community banned shortly after I reported him, lol idiot.