Two popups at the same time and both had the same number but they were both different colors, maybe they are running out of numbers. I noticed as well and this might have been going on for a while, but these popups said windows and not Microsoft but the voice that was going said Microsoft, these people seem to get more scummy by the day. Here is the number I needed a new one the old one blocked me and I only have one google voice number, I need to find a way to get other numbers I can use so if one is blocked I have others. 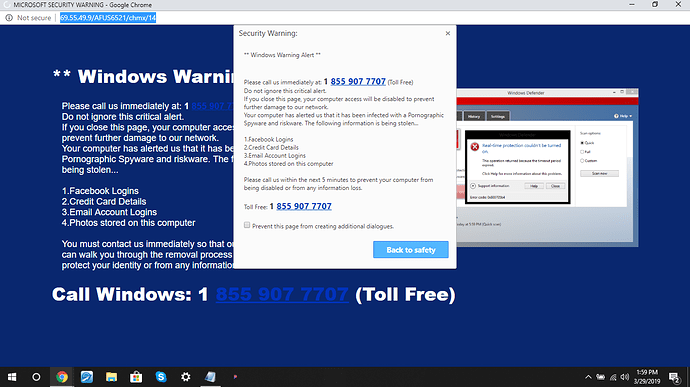 I won’t post the other one since it has the same number and design just a lighter blue.

I found another two that have the same number but the number is different then the ones above. I am starting to wonder how many numbers they have or if they change them daily. Here is the new number 1-855-823-0128 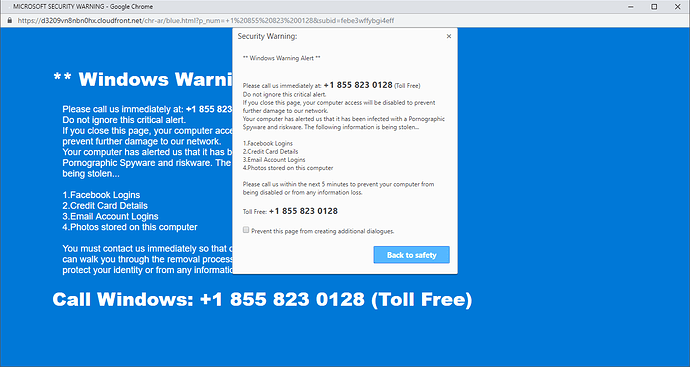 Which Site Were You O When You Got That Message? I Have Been Surfing The Web (E Explorer) Yet I Haven’t Snagged A Popup Yet. I Am Wanting To Get On Of Those On My VM That Way I Can Be REAL Believable When I Go Scam Baiting! Especially On My Days Off!

What I Did Was To Generate Several Email Addresses. Then I Down Loaded The Free Application From The Google Store Called: TextNow You Can Make All The Free US & Canada Text & Phone Calls. Not To Mention Toll Free Numbers. Then I Made An Account For Each Of Those Email Addresses/Names. I Currently Run With Three Different Telephone Numbers. Plus I Have A Burner Cell Phone From TracFone. Not All Of The Scammers Will Share Your Blocked Number With Each Other. Give That A Try.

Its a movie site when you try to push play on the movie they start, it seems like it only does it during the day but at night they don’t show up. I was able to snag the source code for one today and I am going to edit it to be a Scammer Warning. I am not sure if I can post the movie site on here I will send you the link in a message. I have to shut off Ad Block Plus to get it I know people frown on that but I shut it off on sites I trust but ones I don’t or ones with popups I leave it on.

I tried TextNow but it looked like it charges for numbers.I don’t have anything important on this cloudbook I was thinking of just using it instead of a virtual machine but I am not sure yet.

More Numbers, I didn’t take the screen shots because I was grabbing the source code for one of them but I got the numbers from them.

Have fun and stay safe.

When I Signed up With TextNow I Did Not Type In My Name. To Test The Number Out I Called My Cell Phone. It Worked & I Wasn’t Charged Anything. I Was Also Able To Call The TextNow Telephone Number I Was Assigned. I Was/Am Able To Receive & Answer Incoming Telephone Calls (As Long As My Computer Is Up & Running With The App Running) Thru My Computer. When I Signed Up, Using One Of My Identities, It Never Asked For Credit/Debit Card Information. Give That A Try.

It is free I must have read it wrong or was thinking of something else I just got a number for it.Thanks for helping me with this it has an app for Windows 10 and for my Android.

I just finished an upgrade to my desktop so I can load a vm machine on it but I am not sure what OS to use I like Windows 10 and Windows 7 both are good. I think I will go with Windows 10 because I found a lite version of it.