Found a new kind of scam

I was contacted on Twitter by someone claiming to be from the “Illuminati” (seriously, I’m not kidding) trying to con me into sending $150 via Western Union for the so-called “initiation garb” which according to him can “only be gotten from Nigeria”, where he lives but apparently isn’t from, apparently tried to say he’s from the USA but his spelling and grammar gave it away, not to mention the video he sent of himself saying some nonsense about “Hail Lucifer” but he deleted it before I got a chance to download it (sorry, my bad

), his phone number is +234 808 891 9815 and after questioning his Nigerian phone number he dissappeared for 10 minutes, just long enough to create another WhatsApp account, giving me his so-called USA number +1 580-825-6815
I had some real fun messing him around, although it was my first time baiting any scammer so I kinda lost it at one point and lost focus to my anger at these, well, I want to say “people” but we all know they’re not

Speaking of scams, here’s an ad on here 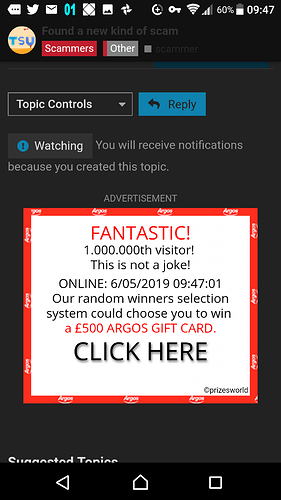 RIPPPP. I know a lot of bot accounts will instantly make posts outting themselves on a website dedicated to busting down on scammers.

What do you mean? They purposefully out themselves? How does that help them?

I am wondering the same thing, but an example: Singapore Airlines Phone Number @ www.proairtravels.com/singapore-airlines/

I saw ScammerRevolts was the first to respond too lol

I came here because of him myself, he’s a good guy, love his videos